A Brief History of Positioning the Guitar

The importance of effectively positioning the guitar and its critical influence on hand movements in playing this instrument was recognized at least 150 years ago. Two of the most famous guitarists of their time, Dionisio Aguado (1784-1849) and Fernando Sor (1778-1839), wrote methods that clearly reveal their concern about problems related to positioning. Their writings indicate that they were both aware of the serious impediments to learning and playing the guitar that arise from painful body tensions and strains resulting from positioning the instrument.

Aguado made some especially astute observations concerning general posture and the left hand: “The player’s posture should be natural; the body should be held straight, without slumping as if to peer forward, or leaning to the left.” He gave special attention to the left hand, stating that it must remain “free to reach all the frets,” and further that, “The angle of the neck must be such that the left hand can cover the fingerboard comfortably from end to end, without tiring when the first frets are used, and without difficulty when the rest are played.”(Italics are mine.) It is worthwhle to clearly note the issues that appeared to be Aguado’s primary concern:

Both Aguado and Sor probably experimented with various ways and means of holding the guitar and, apparently out of frustration, they suggested different solutions which they must have realized would not be practical. An illustration from Sor’s method shows him holding the guitar supported on the corner of an ordinary table. 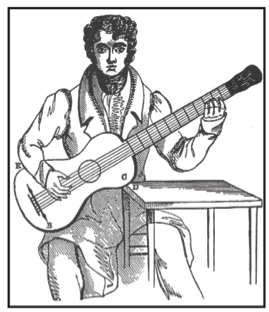 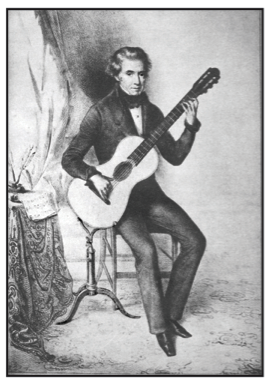 Aguado was even more inventive, as illustrated in his method. He is shown with the guitar cradled on a stand with three legs he called a tripod. Both approaches resulted in a similar positioning of the guitar which more or less solved the problem of bad posture and optimal left hand accessibility to the fingerboard.

Although there is no evidence that anyone ever adopted either approach, we should not ignore the fact that these remarkable guitarists were analysts and thinkers far ahead of their time.  While their written explanations of how the guitar should be held lack essential information and offer no practical solution  to the problem, their focus of attention on general posture and the left hand was certainly more insightful than that of performers and writers of instruction books which followed including those of today. Omissions by Sor and Aguado were apparently due to the same lack of understanding of this extremely important area of technical development that exists in contemporary approaches.